Your Heartburn May be a Risk for Cancer!

Your Heartburn May be a Risk for Cancer! 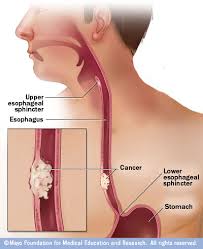 You know what to do for heartburn: pop a couple of antacids after dinner, avoid common triggers like fatty, greasy, or spicy foods, and hope it goes away quickly. Right? Well, not necessarily. If you have regular heartburn—two or more times a week—and haven't notified your doctor, you're ignoring one of the BIGGEST RISK FACTORS FOR ESOPHAGEAL CANCER!!! And even if you had heartburn problems years ago and they seem to have gone away, this is one health issue you shouldn't ignore 1 !           N!!!  People usually feel heartburn as a burning sensation or pain behind the breastbone, neck, throat or mouth. Often, regurgitation of bitter-tasting stomach acid accompanies heartburn, which can be extremely harmful to tooth enamel. An antacid or milk is only a temporary relief.

Esophageal cancer is more common in men than women by about a three-to-one ratio, and most common for both sexes after the age of 55. An estimated 17,460 new cases will be diagnosed in the U.S. this year, according to the American Cancer Society, making it relatively rare among cancers (by comparison, about 226,870 women will be diagnosed with breast cancer). Unfortunately, the survival rates for esophageal cancer are grimmer than many other types: only about 15 to 20% of patients will survive for more than 5 years after diagnosis.

Why Does Heartburn Occur?
A sphincter (specialized muscle) is located at the end of the esophagus. It is known as the lower esophageal sphincter (LES).  The LES muscle should only open when food or liquid is passed into the stomach. However, the LES muscle does not always work perfectly. Sometimes it is too weak to stay completely closed, and stomach juices seep back into the esophagus. There are certain factors that contribute to acid reflux. The most common is eating a large meal whiich may cause pressure in the stomach to rise, and overpowers the LES muscle. The following are other factors that may cause reflux:

Complications of GERD (GastroEsophageal Reflux Disease)
In some people, acid in the lower esophagus actually causes tissue damage. Certain complications can then result:


Treatment of GERD
There are general measures the patient can take to reduce reflux: